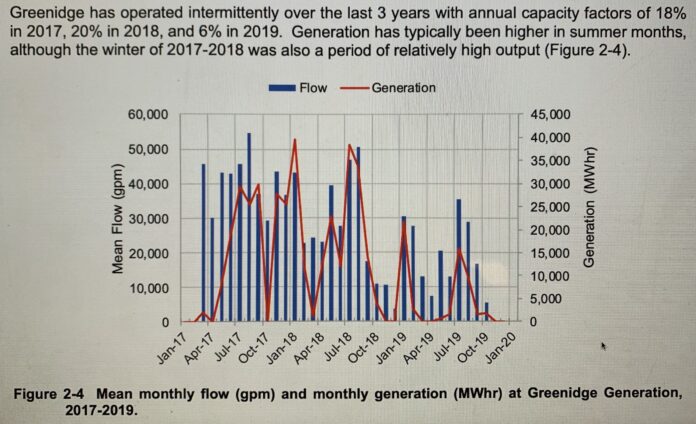 The company won the air and water permits in 2017 on the basis of its stated plan to operate as a peaker plant providing backup power to the electric grid.

This spring, the Dresden power plant pivoted to Bitcoin mining — a lucrative and energy-intensive activity — to better take advantage of its energy generating potential.

While the plant continues to meet its obligations to supply energy to the grid — however intermittently — its growing focus this year has been Bitcoin mining.

As of August, Greenidge was using 20 megawatts of power to mine, and it plans to ramp up to full plant capacity of 106 MW next year, according to Forbes.

The state Department of Environmental Conservation has never fully evaluated the data center operation — including the noise made by equipment used to cool the computers.

“The (proposed) addition of four 42’ by 120’ buildings, each with eight racks of 308 servers and four computer grade fans, closer to the village (of Dresden) will increase the noise even more,” the Yates group said in a Sept. 15 letter to the DEC.

The letter asks the agency to review the permits for “materially false or inaccurate statements in the permit application and newly discovered information or a material change in environmental conditions, relevant technology, and production.”

It specifically challenges Greenidge’s water withdrawal and discharge permits as well as its Title IV and Title V air permits.

Thanks to Cuomo Administration regulators at the DEC and the state Public Service Commission, Greenidge has been transformed in a decade from a mothballed 1930s-era coal-burning power plant to a high tech natural gas-powered facility that prioritizes private investor returns over public power needs.

Built in 1937, the plant was shut down in 2011, the year its then-owner AES filed for bankruptcy protection.

Three years later, Atlas Holdings, a Connecticut private equity group, bought the plant and announced plans to restart it — initially as a coal-burner, but later as a natural gas plant.

In 2016, the DEC ruled that the restarting the plant “will not” have an adverse impact on the environment, overlooking ongoing toxic discharges from Greenidge’s coal ash landfill and violations of the federal Clean Water Act by its cooling system that inefficiently uses Seneca Lake water to cool its turbines. The agency used that negative declaration to allow the company to skip a time consuming and very public environmental impact statement process.

Meanwhile, later that year the state PSC — acting over strenuous public objections — issued Greenidge a “certificate of public convenience and necessity” to operate “on a merchant basis in wholesale markets” administered by the state electric grid operator. For months before the ruling, at press conferences and public hearings, multiple witnesses had asserted that demand for power in the region didn’t justify the PSC permit.

As demand from the electric grid did, in fact, trail off in 2019, Greenidge began looking to generate off-grid power for an energy-hungry Bitcoin mining operation.

In June 2020, the PSC ruled that Greenidge’s off-grid data center was not subject to PSC regulation, dismissing dozens of comments protesting the potential environmental consequences of dramatically gearing up the plant.

“This inefficient old power plant will increase operations, increase use of fossil fuels, and increase greenhouse gas emissions,” Irene Weiser, coordinator of Fossil Free Tompkins, said of the PSC decision. “I don’t see how they can get away with this in the face of CLCPA (Gov. Andrew Cuomo’s signature 2019 climate bill).”

Seneca Lake Pure Waters Association and Seneca Lake Guardian pointed to the plant’s inefficient “once-through” cooling system. The DEC permit allows the plant to discharge up 134 million gallons of heated water a day into Seneca Lake — far more than it has ever needed to supply electricity to the grid.

The Sierra Club has sued Greenidge and the DEC — unsuccessfully, thus far — over the air and water permits. In one of those suits, the DEC filed a motion to strike from the court record an affidavit from Gregory Boyer, a toxic algae specialist, which stated that Greenidge’s warm water discharges could trigger toxic algal blooms in the lake around Dresden. Such blooms have commonly occurred at the peak of bloom seasons.

The warm water discharges are central to the latest appeal to the DEC from the Yates County residents, who are affiliated with the group Committee to Preserve the Finger Lakes.

The DEC allowed Greenidge to restart in March 2017 without up-to-date water intake or discharge permits.

When it finally granted an updated discharge permit six months later, the agency gave the plant until October 2022 to install screens on its coolant water intake pipe to comply with the Clean Water Act.

But the CPFL-coordinated letter raises questions about the technical feasibility of installing the huge intake screens in the shallow water at the end of the intake pipe. The water there is only about 11 feet deep, hardly enough to handle the mammoth screens.

A Greenidge-commissioned study on screening for its turbine cooling system was released in April.

Regulations require the DEC to respond to the CPFL-affiliated group, which includes Abi and Winton Buddington, Eileen and John Moreland, Linda Downs and 17 others.

The group’s letter claims that Greenidge hasn’t stuck to DEC deadlines for producing a thermal study of its coolant system discharges into the Keuka Outlet, which flows into Seneca Lake.

“Discharges of heated water to Keuka Outlet is a significant concern for harmful algal blooms and fish habitat,” the Sept. 15 letter to DEC states. “To date, DEC has not provided any documents related to (an agency-required) study since the Thermal Discharge Work Plan in December 2017.”

Recently, local residents have conducted their own informal survey of water temperatures above and below the point at which Greenidge discharges water into the Keuka Outlet, and at a third point near the outlet’s connection with the lake.

The DEC permit allows Greenidge to discharge of waters up to 108 degrees Fahrenheit, 18 degrees warmer than current federal rules allow, according to CPFL.

Temperature differences between the monitors above the discharge point and below it range from approximately 10 degrees to 25 degrees.

The water cools somewhat as it enters Seneca Lake, according to the results from the monitoring point near the mouth of Keuka Outlet.

This story is brought to you by a partnership between the Water Front blog and FingerLakes1.com.

WaterFront is an all-digital publication dedicated to providing coverage of important environmental politics in the Finger Lakes. He brings decades of reporting and editorial experience to his coverage, which includes frequent deep-dives into important, local topics. Send him an email at [email protected].