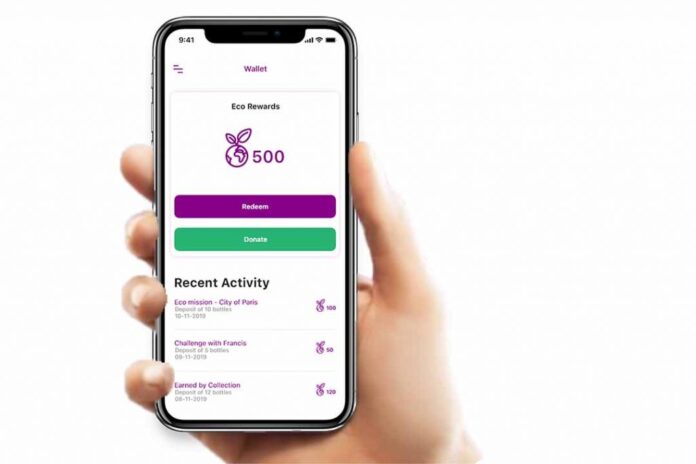 Users of the ZeLoop app will receive cryptocurrency for bringing materials to recycling collection sites. | Courtesy of ZeLoop.

A mobile app in beta testing seeks to reward users for properly recycling materials at drop-off locations. The company says an exchange of currency is vital to the process.

Dubai-headquartered ZeLoop has developed an app that informs users of recycling options and rewards them for bringing recyclables to those sites. The app is beginning with a focus on plastic bottles and plans to roll out its platform to cover more materials in the future.

Beyond the app, ZeLoop has developed a cryptocurrency system to support the rewards program. Users will receive cryptocurrency for bringing materials to recycling collection sites, and ZeLoop aims to bring in large consumer-facing businesses that will allow consumers to use the currency for various goods or services.

Alberto Saavedra, U.S. manager for ZeLoop, said the concept is built off the idea of supporting a circular economy. But he takes that concept further than the common buzzword – he looks at it in economic terms.

“You cannot have an economy without some sort of circulation of currency,” he said.

“We believe in capitalism, if you wish,” Saavedra added. “We don’t believe that we should order people to recycle. We should compensate them for recycling.”

The app developer wants to work with packaging firms, recycling companies, retailers and other industry stakeholders.

How the app works

ZeLoop has several core functions, beginning with informing users where to recycle. Users can access a map detailing nearby recycling locations, and they can also edit that map and contribute to the location database, a service that will also reward them with the cryptocurrency points.

Under the app rewards platform, a user would take a load of plastic bottles to a drop-off recycling site and use the app to take a photo while dropping the recyclables off. ZeLoop then has a way of validating that it is a legitimate recycling claim, using a proprietary feature of the software, Saavedra said.

Then, the user will receive compensation through a cryptocurrency similar to Bitcoin. Cryptocurrency draws its value from its limited quantity, Saavedra explained, as well as the fact that the currency does not degrade and cannot be modified or falsified.

ZeLoop’s cryptocurrency system comes in the form of “eco-rewards.” Under this system, a limited number of eco-rewards will be created and awarded to ZeLoop users when they recycle materials. That currency will then be redeemable at various partnering stores or other businesses, under the ZeLoop plan.

“Organizations will be able to participate in this cryptocurrency exchange to start monetizing the eco-rewards,” Saavedra said.

Depending on what a partnering company chooses, eco-rewards could be redeemable for services or products, or could even be exchanged for cash.

The app also brings game-like concepts into its platform. This portion of the app is called “eco-missions,” and under this system, a recycling organization could create certain “missions” for a user to undertake and receive bonus rewards points.

For example, a recycling location could provide higher rewards compensation for bringing a certain quantity of bottles to a specific drop-off site on a specific day. These “missions” would be created by sponsoring partners.

Current status and next steps

ZeLoop is starting out with a focus on plastic bottles and drop-off sites, but the platform plans to expand that focus to curbside recycling in the future, Saavedra said.

For now, the app is in beta testing and available for users to try it out. ZeLoop is hoping for a wider commercial launch later this year, although Saavedra noted with the pandemic disruptions this year, that date may be pushed out.

The commercial launch will begin in Dubai, where company CEO Eric Schaffner is based, and Uruguay, where Saavedra is from, and will roll out to a wider user base from there.

“A month after we launch in Dubai and Uruguay, we’ll be ready to launch everywhere else,” Saavedra said.

ZeLoop will generate revenue by advertising, offering a premium version of the app, and taking a commission from the sponsorships with partnering companies, Saavedra said.

The company detailed its future plans in a white paper published on its website.