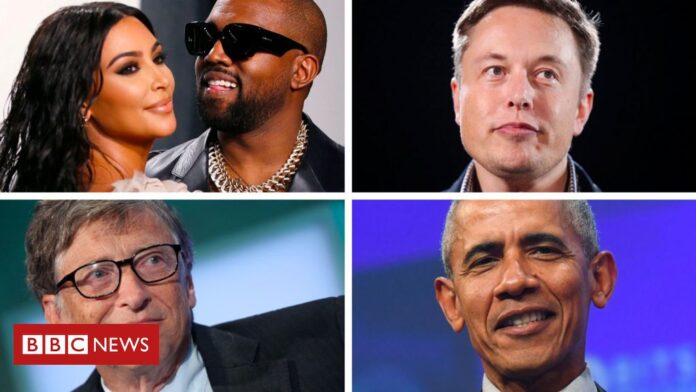 Billionaires Elon Musk, Jeff Bezos and Bill Gates are among many prominent US figures targeted by hackers on Twitter in an apparent Bitcoin scam.

The US Senate Commerce committee has demanded Twitter brief it about the incident next week.

Twitter said it was a “co-ordinated” attack targeting its employees “with access to internal systems and tools”.

“We know they [the hackers] used this access to take control of many highly-visible (including verified) accounts and Tweet on their behalf,” the company said in a series of tweets.

It added that “significant steps” had been taken to limit access to such internal systems and tools while the company’s investigation was ongoing.

The firm has also blocked users from being able to tweet Bitcoin wallet addresses for the time being.

Meanwhile, Twitter chief executive Jack Dorsey tweeted: “Tough day for us at Twitter. We all feel terrible this happened.”

The UK’s National Cyber Security Centre said its officers had “reached out” to the tech firm.

“While this appears to be an attack on the company rather than individual users, we would urge people to treat requests for money or sensitive information on social media with extreme caution,” it added in a statement.

US politicians also have questions. Republican Senator Josh Hawley has written to the company asking if President Trump’s account had been vulnerable.

President Trump’s account was not compromised, the White House said. “The president will remain on Twitter. His account was secure and not jeopardised during these attacks,” a statement said.

“It cannot be overstated how troubling this incident is, both in its effects and in the apparent failure of Twitter’s internal controls to prevent it,” Senator Roger Wicker wrote to the firm.

He added that the company must brief the committee’s staff about the hack no later than Thursday 23 July.

One cyber-security expert said that the breach could have been a lot worse in other circumstances.

“If you were to have this kind of incident take place in the middle of a crisis, where Twitter was being used to either communicate de-escalatory language or critical information to the public, and suddenly it’s putting out the wrong messages from several verified status accounts – that could be seriously destabilising,” Dr Alexi Drew from King’s College London told the BBC.

Twitter earlier had to take the extraordinary step of stopping many verified accounts marked with blue ticks from tweeting altogether.

By 20:30 EDT (00:30 GMT Thursday) users with verified account started to be able to send tweets again, but Twitter said it was still working on a fix.

Tough day for us at Twitter. We all feel terrible this happened.

We’re diagnosing and will share everything we can when we have a more complete understanding of exactly what happened.

? to our teammates working hard to make this right.

Dmitri Alperovitch, who co-founded cyber-security company CrowdStrike, told Reuters news agency: “This appears to be the worst hack of a major social media platform yet.”

On the official account of Mr Musk, the Tesla and SpaceX chief appeared to offer to double any Bitcoin payment sent to the address of his digital wallet “for the next 30 minutes”.

“I’m feeling generous because of Covid-19,” the tweet added, along with a Bitcoin link address.

The tweets were deleted just minutes after they were first posted.

But as the first such tweet from Musk’s account was removed, another one appeared, then a third.

A spokesman for Bill Gates told AP news agency: “This appears to be part of a larger issue that Twitter is facing.”

The BBC can report from a security source that a web address – cryptoforhealth.com – to which some hacked tweets directed users was registered by a cyber-attacker using the email address [email protected]

The name “Anthony Elias” was used to register the website, but may be a pseudonym – it appears to be a play on “an alias”.

Cryptoforhealth is also a registered user name on Instagram, apparently set up contemporaneously to the hack.

The description of the profile read “It was us”, alongside a slightly smiling face emoticon.

The Instagram profile also posted a message that said: “It was a charity attack. Your money will find its way to the right place.”

In any case, the real identities of the perpetrators are as yet unknown.

An unprecedented ‘smash and grab’

These “double your Bitcoin” scams have been a persistent pest on Twitter for years but this is unprecedented with the actual accounts of public figures hijacked and on a large scale.

The fact that so many different users have been compromised at the same time implies that this is a problem with Twitter’s platform itself.

Early suggestions are that someone has managed to get hold of some sort of administration privileges and bypassed the passwords of pretty much any account they want.

With so much power at their fingertips the attackers could have done a lot more damage with more sophisticated tweets that could have harmed an individual or organisation’s reputation.

But the motive seems to be clear – make as much money as quickly as they can. The hackers would have known that the tweets wouldn’t stay up for long so this was the equivalent of a “smash and grab” operation.

There are conflicting accounts of how much money the hackers have made and even when a figure is settled upon, it’s important to remember that cyber-criminals are known to add their own funds into their Bitcoin wallets to make the scam seem more legitimate.

Either way, it’s going to be very hard to catch the criminals by following the money. Law enforcement, as well as many angry users, will have some strong questions for Twitter about how this could have happened.

Cameron Winklevoss, who was declared the world’s first Bitcoin billionaire in 2017 along with his twin brother Tyler, tweeted a message on Wednesday warning people not to participate in the “scam”.

In the short time it was online, the link displayed in the tweets of targeted accounts received hundreds of contributions totalling more than $100,000 (£80,000), according to publicly available blockchain records.

Dr Drew recently co-authored a paper warning about the potential of Twitter being used to sow disinformation.

She said the latest incident highlighted the need for all major social media platforms to check their security measures, particularly in the run up to the US Presidential vote.

“Social media companies such as Twitter and, Facebook all have a duty to consider the damage and influence their platforms can have on the 2020 election, and I think some companies are taking that more seriously than others,” she told the BBC.

“Twitter actually has a good history of being forward-thinking and proactive in this space.

“But whatever the source of this attack [it seems they have] still not done enough.”

The FBI’s San Francisco field office put out a statement on Wednesday about the latest cyber-breach.

“The accounts appear to have been compromised in order to perpetuate cryptocurrency fraud,” it said.

“We advise the public not to fall victim to this scam by sending cryptocurrency or money in relation to this incident.”