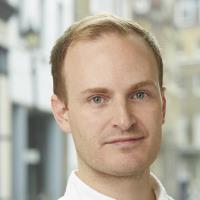 A colleague that I have a lot of time for recently asked me what my view on banks and cryptocurrency was. As a Product Director for Payments at a B2B2X SaaS Fintech called Currencycloud,
he probably assumed that I was laden with lofty ideas on this topic. The reality is that I’m a lot closer to the definition above.

“Banks are terrified of cryptocurrency,” I answered.

Surely banks can’t be scared of crypto?! Well, fear is caused by a threat to your current reality. For many banks, their current reality is of power, market dominance, and profit. If any or all of those are threatened, it generates the innate “fight or flight”
response. But for a bank to fight the threat of crypto, they need a deep understanding of cryptocurrency, which at least according to John Oliver means an understanding of both “money and computers”. While banks may understand money, they may not get the inner
technical workings of crypto. Acquiring that deep technical understanding of how cryptocurrency works is expensive, and an activity that may not generate enough of a return on an investment at this stage. Industry expert Chris
Skinner stated back in 2015that blockchain was 10 to 20 years away from being mainstream in Financial Services. A 20 year ROI is hard for even the most persuasive people to sell.

This is, of course, a broad brush stroke of a position that doesn’t reflect every bank: JP Morgan’s JPM Coin and Interbank
Information Network as a permissioned variant of the Ethereum blockchain are perhaps the most obvious exceptions to this rule. But for the most part, banks are terrified of cryptocurrency because the only protection mechanism they have to this emerging
threat is through flight, not fight.

(There is also the parallel counter-argument that banks shy away from cryptocurrencies because they are intangible assets that banks have to deduct from their balance sheets, which in turn reduces confidence in them as a credit institution, but this also
verges beyond my scope of knowledge, and perhaps of this post too.)

Central Bank Digital Currencies (or CDBCs if you want to sound swanky) are emerging around the world at
a rapid rate. Trials are in place, with central and commercial banks working together to understand how this new technology fits within the financial world they already know. The concept has been directly influenced by crypto technology, and is already
being trialled and tested in various proof of concept models globally.

But if banks are terrified of cryptocurrency, why are they not afraid of CBDCs?

I think it comes down to two reasons:

But some would also argue that without state backing, without institutions and authorities to regulate a currency, people would lose that trust in that very medium of exchange. Perhaps the trust of the people and the power of the institutions who govern
those people are two sides of the same coin (pun absolutely intended). But if they are, then you have two forces essentially moving in the same direction, which is not towards cryptocurrencies, but towards state-backed and -regulated digital currencies using
similar technology and principles from which cryptocurrency has emerged.

If we all accept for a moment that in most developed economies we trust in fiat currency, and will likely continue to do so for the near future, we must also accept that we trust that the people and institutions who manage and regulate fiat currency are
doing this successfully. (If they weren’t, we would already have lost that trust and have moved to other mediums of exchange.) By trusting these people, we are in turn accepting that these people understand money and the complex financial systems.

And by that train of logic, I find myself comfortable with the fact that Central Bank Digital Currencies will be integral to the next evolution of financial technology. That next evolution is already underway, and is about the integration of financial services
outside of the Financial Services industry itself. We’ve seen other industries and people’s lives transformed through digitalisation (shopping with Amazon, travelling with Uber, searching with Google). The evolution of payments will allow non-financial companies
to embed truly digital services into their apps and websites, in turn making the experience and journey that bit easier, faster, cheaper or more tailor-made for the likes of you and me. CDBCs will be a key enabler for this journey.

If CBDCs do help businesses embed financial services at a deeper level than previously before, and if that then allows customers like you and me to do more for less in our busy everyday lives, this will only help increase the trust that we all have in CDBCs.
And by increasing our collective trust in a digital proposition that simultaneously is controlled by the institutions in whom we already trust, in future this will only widen the gap between Cryptocurrency and Central Bank Digital Currency.

Avid crypto supporters and investors will no doubt disagree. But next time I’m asked my opinion on banks and cryptocurrency, I’ll probably have a more definitive answer: