This article provides an overview of how Bitcoin (BTC), Ethereum (ETH), Cardano (ADA), and Chainlink (LINK) have been doing over the past 24-hour period, covers recent news that might have affected their prices (or might do so in the future), and looks at interesting observations about these digital assets from prominent members of the crypto community.

To give you a rough idea of how well the crypto markets are doing today, 13 out of the top 20 cryptoassets (by market cap) are currently in the red (i.e. down against USD).

All market data used in this article was taken from CryptoCompare around 09:20 UTC on 3 July 2020. 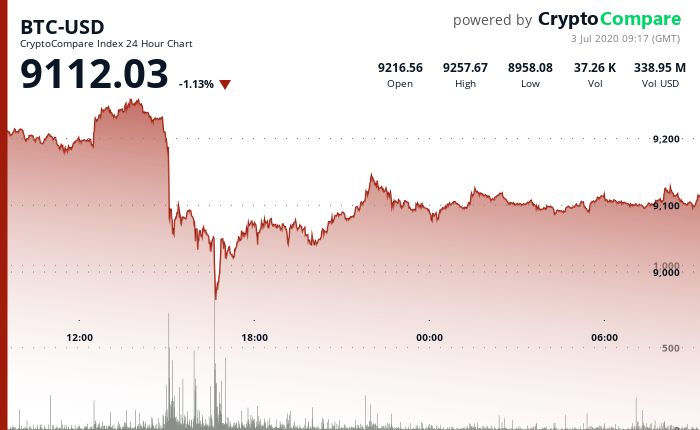 This means that Bitcoin has been trading below the psychologically important $10,000 level since June 2.

U.S. stock prices, which have steadily been going up since March 23 despite the worsening COVID-19 crisis in the U.S., were finally given a good reason to go up yesterday: much better than expected non-farm payrolls.

According to a report by CNBC published yesterday, according to the U.S. Labor Department, “nonfarm payrolls soared by 4.8 million in June and the unemployment rate fell to 11.1% as the U.S. continued its reopening from the coronavirus pandemic.”

Bitcoin, however, did not get a boost from this news, even though for quite a few periods since the start of the COVID-19 pandemic it has shown some positive correlation to the S&P 500.

Another plausible reason is concern in the crypto community over a potential upcoming crackdown on OTC trading of crypto in China:

Reportedly, Zhao Dong, the head of over-the-counter (OTC) and #crypto lending platform RenrenBit has been taken into a police station in the city of Hangzhou, located in the Zhejiang province. #Chinahttps://t.co/ZF9PihSE9Q

There was some good news however on Wednesday (July 1) from on-chain market intelligence startup Glassnode regarding one of the Bitcoin network’s fundamentals, number of new addresses, which reached a new 2-year high on this day:

Another bit of good news that came out yesterday was the announcement by crypto payments processor BitPay, reported by Coindesk, that later this year “support for SegWit will be a default for all Bitcoin wallets.”

Famous goldbug Peter Schiff who does not allow any opportunity to criticize Bitcoin to go to waste took to Twitter once again yesterday to point out that Bitcoin has performed poorly compared to gold between June 2019 and now, conveniently ignoring the fact that over longer time frames, since its existence, Bitcoin has done much better than gold against USD: 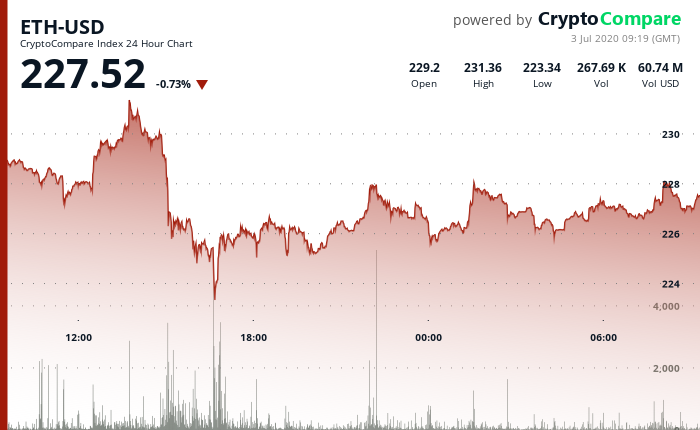 Although there is disappointment among some ETH HODLers that Ethereum, which powers almost all of the hottest projects in decentralized finance (DeFi), was not able to benefit from the huge amount of excitement around DeFi projects such as Aave (LEND), Compound (COMP), and Synthetix (SNX), true believers in Ethereum insist that as the Ethereum ecosystem continues to grow, sooner or later, investors’ appetite for ETH will significantly increase, which should lead to much higher prices.

Earlier today, Paul Salisbuy, Co-Founder of New Zealand based startup Blockchain Labs, used the infographic shown below to talk about the ‘DeFi Vortex” that he believes (along with the team at digital asset investment firm Techemy Capital) is “accelerating the velocity of Ethereum”:

This is how we @TechemyCapital view the cryptoeconomic drivers and feeds into #DeFi as an Open Finance ecosystem.

1/ A thread on the #DeFiVortex that is accelerating the velocity of #Ethereum ? pic.twitter.com/9T6AfdgYXY 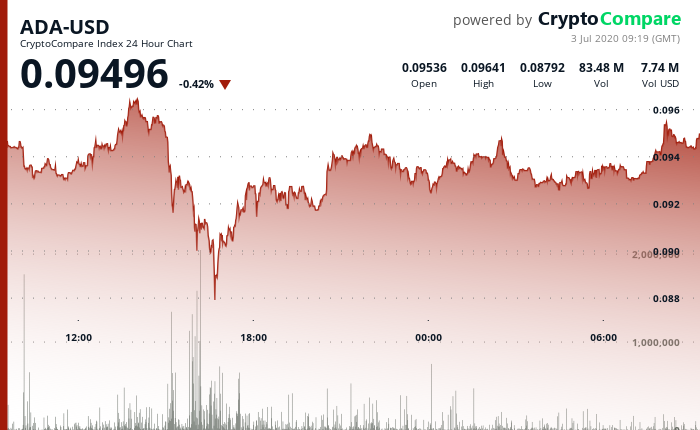 Since “Black Thursday” (March 12), when the ADA price reached a 2020 low of $0.02319, it has gone up almost 310%, and the reason for this highly impressive performance has to be how well the work on Cardano’s Shelley update has gone during the past few months.

On Tuesday (June 30), IOHK announced that the Shelley codebase had been released on Cardano’s mainnet (but note that the actual hard fork is not expected until around July 29):

OK so… today’s mission (s) accomplished. Shelley-complete node 1.14.2 now successfully deployed to the Cardano mainnet. Next stop… the #Cardano2020 #ShelleyEdition virtual summit. (P.S. Thanks to all our amazing #Cardano community pioneers who have brought us here @Cardano

A day later, the Cardano Foundation launched a new website:

We are pleased to announce the launch of the new #Cardano website! This is one of the deliverables of Project Renovare, the brand reappraisal exercise led by the Cardano Foundation, ahead of the smart contracts rollout later this year. https://t.co/8q4uYZAnoB#CardanoCommunity pic.twitter.com/kBWpbSc7iQ

@IOHK_Charles announced the launch of a $20million technology ecosystem fund – in partnership with Wave Financial Group – the first venture fund to support the adoption of @InputOutputHK blockchain platforms, including Cardano. #cardano2020

According to a press release shared with CryptoGlobe, here were a couple of the other announcements made by IOHK at this virtual summit: 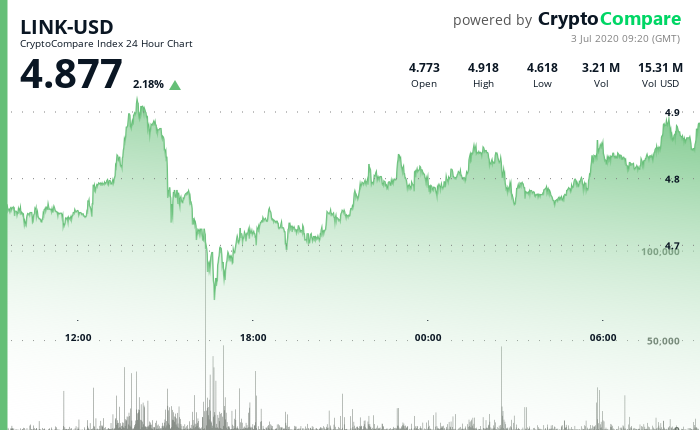 This means that LINK is currently trading at (or very close to) its all-time high. For the year-to-date (YTD) period, LINK’s return on investment (ROI) against USD is +177.10%.

As usual, the reason for LINK’s continued excellent performance in the market is the ever-growing list of partnerships (and other bullish news) announced by the Chainlink team.

Here are three of the latest of these partnerships:

NFT-focused @PolyientGames is integrating #ChainlinkVRF to assure transparency for the minting and random distribution of PGFK rewards—a membership #NFT that provides lifetime rewards & perks to holders within the Polyient Games Ecosystem. https://t.co/6LuiTyvuYV

One of the world’s top cryptocurrency exchanges @HuobiGlobal is making its exchange data available to smart contracts through the #Chainlink Network. Additionally, @HuobiWallet is currently running a live Chainlink Node.

Featured Image by “WorldSpectrum” via Pixabay.com