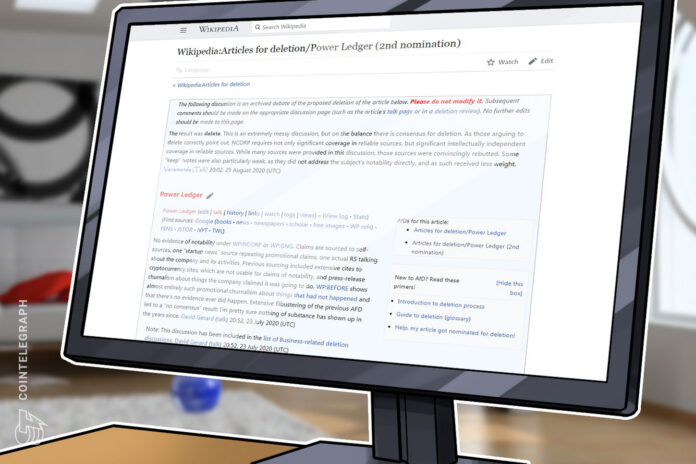 Anti-crypto activist David Gerard — author of Attack of the 50-Foot Blockchain — has once again used his influence as a senior Wikipedia editor to remove a blockchain related entry about Australian firm Power Ledger.

In his latest blog posting, the Wikipedia editor appeared to boast about his success in having the Power Ledger article deleted, which he said was:

“on the basis of being a pile of press-release churnalism, and the only genuine press coverage was about how Power Ledger was a scam”

A publicly available discussion between Wikipedia editors debating the Power Ledger page shows Gerald arguing that content from crypto news publications is “not usable for claims of notability.”

One of the articles referenced for the page was from crypto news outlet CoinRivet, which Gerald called a “bottom-of-the-barrel Bitcoin blog.” He also managed to similarly dismiss articles in India’s The Economic Times and Tech Crunch as “churnalism”. The term is used to describe news outlets directly reporting on press releases without much, if any, investigation.

After a long discussion the page was deleted with the final judgement on Aug. 25 stating that there was not enough “significant coverage in reliable sources.” Editors like Gerald “convincingly rebutted” the sources cited.

To put this judgement into perspective, the “unreliable” Tech Crunch has 16 million readers and Wikipedia’s own entry on The Economic Times calls it “the world’s second-most widely read English-language business newspaper”.

Gerard makes no secret of his bias against blockchain and cryptocurrency, which he thinks is “absolutely and thoroughly a field full of spammy cranks, who try it on at Wikipedia” and he has described his book as being about “why cryptocurrencies and blockchains are terrible – all of them”.

Gerard was instrumental in imposing ‘general sanctions’ on entries about the entire industry which is why there is a dearth of such cryptocurrency and blockchain content in the online encyclopedia.

In a Jan. 27 Wikipedia Signpost article, he stated he “hated” crypto and crypto news outlets:

“No crypto blogs, no crypto news sites — because these look like specialist trade press, but they’re really about advocacy: promoting their hodlings. Many are blatantly pay for play, and very few ever saw a press release with ‘blockchain’ in it that they wouldn’t reprint.”