The value of COMP–the native token that belongs to Ethereum-based DeFi platform Compound, which acts as an autonomous interest rate protocol built for developers–is currently down roughly 46 percent from its peak of ~$372 (CoinGecko) last month. Over the weekend, the coin was down to $165, a decrease of roughly 55 percent; at press time, the price had recovered to roughly $198. What’s going on?

According to CryptoSlate, much of the fall in the price of COMP occurred after the token was listed on Coinbase Pro on June 23rd. 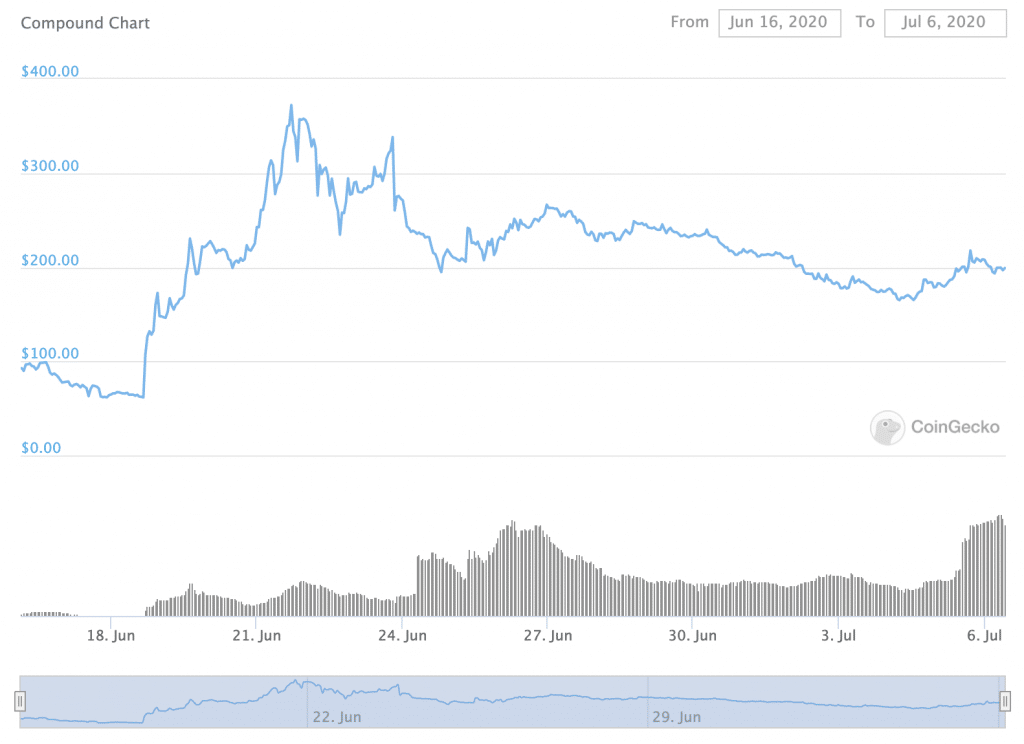 It has been theorized that because Coinbase was one of the first “mainstream” exchanges to have listed the COMP token, it’s possible that the listing gave an opportunity for numerous COMP holders to sell their tokens for the first time.

According to some analysts in the crypto space, COMP may be poised to fall further: a Twitter analyst that posts under the name @ThetaSeek said on July 2nd he (or she) is “short on $COMP”, citing a belief that Compound’s “the fundamentals of the ‘governance’, given the public information, don’t make too much sense today.”

Theta Seek went onto say that “given that the $COMP market cap is at $2 billion when there’s $1 billion of AUM…the fair value of the token, (assuming similar long term profitability as other crypto AUM businesses) should be at around $50 today,” roughly 25 percent of COMP’s value (~$198) at press time.

Did COVID-19 Save the Forex Industry?Go to article >>

Is DeFi a bubble?

Of course, it very may well not be the case that the price of COMP will fall any further, and that the correction that occurred over the past several weeks was sufficient to reflect COMP’s usage.

However, there seems to be a broader debate raging on at the moment over whether or not the DeFi sector as a whole is overvalued at the moment: as this moment in DeFi is increasingly compared to the ICO boom in 2017, the phrase “is DeFi a bubble?” seem to be more popular on Twitter now than ever before.

#DeFi is going to be the next bubble. It’s providing real, unique value with better token models, which will spark a ton of speculation, but underlying is actual usage beyond just a whitepaper and trading.

Part of the reason that DeFi has been increasingly described as a bubble is due to the fact that there have been a number of price surges on DeFi governance tokens over the past 12 months, including COMP: in June, CoinDesk reported that COMP’s price had double in less than 24 hours in “DeFi Mania.”

“The apparent runaway success of the token offers a glimpse into just how frenzied the speculation has become over the future of decentralized finance, or DeFi – blockchain-enabled systems, mostly using the Ethereum network, that allow for the lending and trading of cryptocurrencies and other digital assets, without the need for trusted intermediaries like banks and centralized exchanges,” CoinDesk reported.

Finance Magnates reached out to Compound for commentary, but did not receive a response. Comments will be added to this story as they are received.