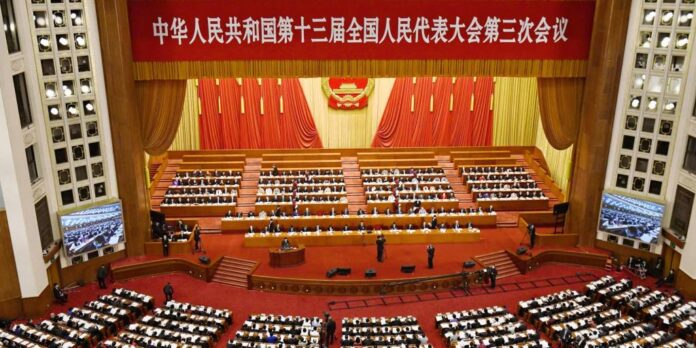 TOKYO — Global competition for supremacy in digital currencies has entered a new phase with China’s creation of an East Asia cryptocurrency scheme and American social media company Facebook adjusting its Libra plan in line with the stance of U.S. regulators.

At a meeting of the Chinese People’s Political Consultative Conference, a political advisory body, at the Great Hall of the People in Beijing from May 21, 10 members proposed a plan to create a digital currency consisting of the Chinese yuan, Japanese yen, South Korean won and Hong Kong dollar.

The CPPCC, made up of representatives from various sectors, is held on the sidelines of the National People’s Congress, the national legislature, to discuss key issues. The proposal at the CPPCC suggests that earnest deliberations on the regional digital currency scheme are well underway in China.

As the People’s Bank of China, the country’s central bank, has already begun testing a digital yuan in Shenzhen and four other locations, the proposal is in line with a national project to put its sovereign cryptocurrency into use.

As the 10 members in the proposal said it was “suitable” for the private sector to take the initiative in creating the regional digital currency, the framework is expected to be adopted with the government’s endorsement.

While the planned regional cryptocurrency’s value will be backed by a basket of four currencies, the ratios of endorsement will be determined by the economic scale of the associated economies, according to the proposal. Thus, the renminbi — another name for the yuan — and yen are calculated to account for more than 60% and 20% of the guarantee, respectively.

The proposal envisions establishing a cross-border payment network in which businesses will make deals with each other using digital wallets. The network will help expand international trade as it will lessen the risk of foreign exchange volatility and allow smooth transaction, advocates say.

The network would be positioned to support a free trade agreement being negotiated by Japan, China and South Korea. It is also, therefore, a new attempt to create a trade zone combining digital currencies and trade policies, analysts said.

China may also be trying to maintain ties with Japan and South Korea at a time when the U.S. is pressing for a decoupling from China.

The proposal is clearly in line with China’s drive to increase the use of its currency internationally. With the U.S. successively barring dollar-based transactions as a sanction against adversarial countries, China is rushing to build a payment network independent of the dollar, which so far has been indispensable for international business transactions.

China has accelerated studies on the digital yuan after seeing the Libra cryptocurrency plan announced by Facebook in June last year as a rival. To China, the Libra, which is centered on the dollar, seems no different from a digital dollar disguised as a currency basket.

With the latest plan for an East Asian digital currency, China would become the one to use a currency basket to promote its currency’s broader internationalization.

Meanwhile, the Libra Association, a group organized by Facebook to manage the digital currency, announced in April a new plan to offer separate coins backed by individual fiat currencies such as the dollar and euro, shelving the initial plan for a basket. The change reflects financial regulators’ concerns, among many others, that the use of different currencies in a single country would weaken the effect of monetary policy.

Ironically for China, worried about the Libra currency basket, the new plan involves the issuance of Libra tokens that are even closer – if not equivalent – to digital greenbacks.

Furthermore, the revised Libra plan indicates that if a central bank digital currency such as the digital dollar becomes available, the Libra network could not only adjust itself to serve as a payment platform but also ditch its own version of single-currency digital coins.

Although U.S. monetary authorities are considered to be cautious on cryptocurrency, their actual stance remains uncertain.

China’s digital basket currency plan demonstrates that a public-private collaboration is burgeoning in that country to design and promote a cross-border digital currency with the yuan at its core.

Against this backdrop, calls are expected in the U.S. and other nations for closer cooperation between monetary authorities and technology companies to help develop a cross-border digital dollar or a counterpart such as a cross-border pound.

In Japan, nine companies, including megabanks and East Japan Railway, have started studies on mutual use of private digital currencies and electronic payment systems with participation by monetary authorities.

While the move is a first step toward creating a digital yen under the initiative of the private sector, Japan should avoid the “Galapagosization” — evolutionary isolation — that would result from developing a digital payment infrastructure that lacks global interoperability.

Japanese mobile phones that developed peculiar features to cater to domestic market but eventually lost global competitiveness, are often cited as a prime example of Galapagosization, or Galapagos syndrome — a word derived from the Galapagos islands, where the biologist Charles Darwin observed distinct species on certain islands that came to exist after taking a different evolutionary path.

As a matter of concern to Japan, the yen was dropped from the revised Libra plan as a candidate for the single-currency digital coin, although it was one of the five currencies comprising the original Libra currency basket. The Singapore dollar, however, was among the currencies mentioned as a candidate, along with the dollar, the euro and the pound.

“Japan does not reject [being chosen as a single-currency Libra] but promoters of the initiative probably consider the yen unattractive, as the chances of its use in cross-border transactions are low,” a Japanese financial official said in reference to the yen’s exclusion.

Japan needs to work out a grand design for its cryptocurrency strategy by taking into account how it wants the yen’s global position to be in the coming decades.