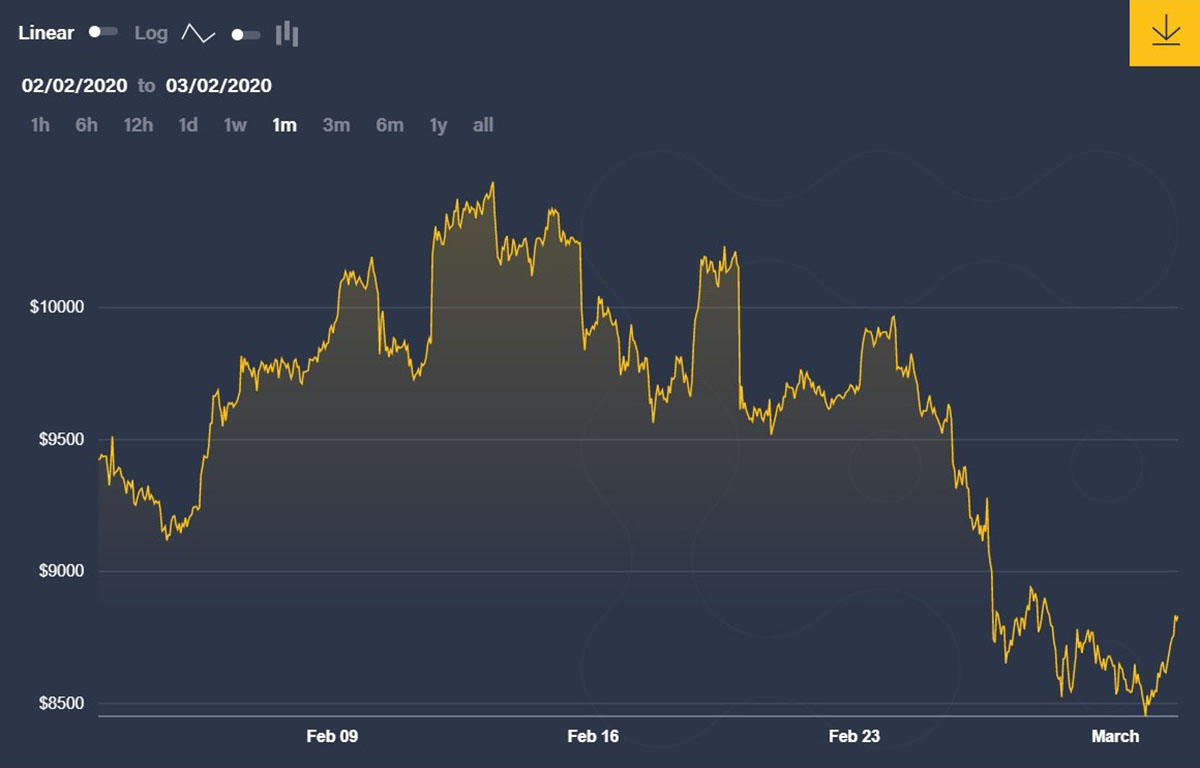 Noelle Acheson is a veteran of company analysis and CoinDesk’s director of research. The opinions expressed in this article are the author’s own.

The following article originally appeared in Institutional Crypto by CoinDesk, a weekly newsletter focused on institutional investment in crypto assets. Sign up for free here.

If there ever was a week when crypto narratives got confusing, it was last week.

Those who believe in bitcoin’s safe-haven narrative (fewer in number by the hour) are struggling to make sense of the correlated slump which left the bitcoin (BTC) price down even more in percentage terms over the past two weeks than the S&P 500 (-15 percent vs -12 percent). Gold, bitcoin’s “analog” counterpart, actually went up (4.5 percent).

Those that maintain it is a risk-on asset (growing in number by the hour) are transfixed by the jump in correlation between bitcoin and the S&P. Whatever happened to the pitch on the importance of having an uncorrelated asset in your portfolio? (True, it’s still at a low level, but it’s no longer negative.)

While analysts and fund managers produce arguments for bitcoin being both risk-on and risk-off at the same time, the bigger crypto story is happening beyond our markets. And it is worth paying attention to.

The stock market’s shellacking last week seems to have been triggered by concerns about the economic impact of supply chain disruption and production slowdowns caused by coronavirus prevention measures. While these factors are unlikely to have a big impact on bitcoin fundamentals (no matter how delayed mining equipment deployment gets, the protocol will keep doing its thing), in times of fear investors exit riskier assets. They also exit liquid assets, and bitcoin is probably easier to offload than other high-risk holdings such as thinly traded stocks or private equity.

Moving beyond markets,
the disruptions will have a deeper and longer-lasting impact on global supply
chains. This threat, combined with building tensions elsewhere, could
eventually consolidate crypto’s risk-off status, and endow it with the use case
the market has been waiting for.

Unless the coronavirus
spread is quickly contained, global supply chains will need to be reconfigured
to more local variations. This will most likely accelerate the already-present
unwinding (due to trade tensions and increased border controls) of the globalization
trend in manufacturing that had led to lower costs all around.

This unwinding will most
likely push up costs for consumers, as low-cost manufacturers (usually based in
Asia) are replaced by less efficient or more highly taxed local suppliers. This
could finally produce the inflation that central bankers have been longing for.

However, this inflation could manifest just at the time central banks are yet again lowering rates and flooding the markets with new money to combat the market slump. Last week’s fall may be temporary – but it was the largest since the 2008 crisis, which is understandably ringing alarm bells.

Running in parallel, we have political uncertainty. The market rout, if it continues, could end up having a significant impact on the upcoming U.S. elections. A large driver of Donald Trump’s support has been the strength of the S&P 500. Should that evaporate, support could swing. And an increased likelihood of a victory for Bernie Sanders, for instance, could further spook the markets, perhaps making that victory even more likely.

Uncertainty in the
U.S., both economic and political, is likely to spill over into other regions,
perhaps pushing countries further towards populism as economies struggle and local
tensions escalate.

You see where I’m
heading with this? It’s not towards a fog of doom and despair. It’s toward the growing
realization that there is an alternative. The mix of rising inflation, more
printing of money and growing populism should heighten global interest in an
alternative asset that is immune to inflation, monetary depreciation and
political manipulation.

The likely eventual outcome,
after tragic suffering and wealth destruction which is never a good thing, will
be a new type of narrative, one with greater clarity and acceptance, not to
mention urgency.

Bitcoin may be a risk-on asset now, as uncertain narratives, contained liquidity and limited awareness put it in the “optional” bucket of most portfolios. But as its use case becomes even more obvious, given macro developments that highlight the vulnerability of fiat-based finance, it could finally rise to become the “safe haven” or “necessary hedge” that we have been talking about. This is the kind of scenario that bitcoin was created for.

Disclosure: the author holds a small amount of bitcoin and ether, and no short positions.