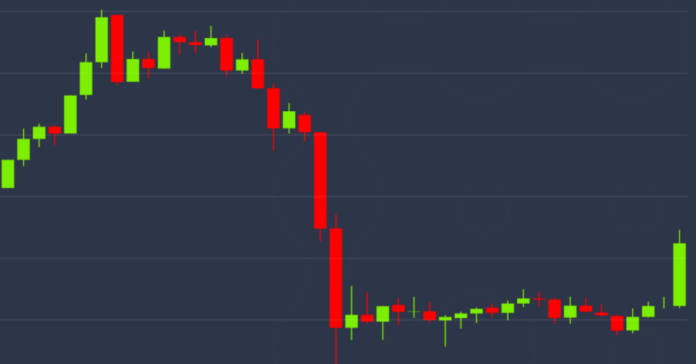 Bitcoin is reporting losses on Monday, having ended last week with its longest weekly winning streak in nearly a year.

The top cryptocurrency by market value fell by $300 soon after midnight to hit a 12-day low of $6,600. Bitcoin was last seen trading near $6,693, representing a 2.5 percent decline over 24 hours, according to CoinDesk’s Bitcoin Price index (BPI).

A near 2 percent price rally seen in the seven days to April 12 had marked bitcoin’s fourth straight weekly gain. Prices rose 15.4, 1.0, and 8.8 percent in the previous three weeks, respectively. A four-week winning trend was last seen in May 2019, as seen below.

Further, the follow-up to the latest four weeks of gains has been negative so far. The cryptocurrency is flashing red, as noted above, and may continue to lose altitude in the near term, with some observers suggesting the recent equity market rally is liquidity-driven and has potential to unravel.

As of Thursday, the S&P 500, Wall Street’s benchmark index, was up 27 percent from multi-year lows near 2,200 observed on March 23. The Federal Reserve has announced multiple easing programs worth trillions of dollars over the past few weeks to help contain the impact of the coronavirus and cushion the markets.

However, the rally could soon begin to unwind, pushing bitcoin lower. That’s because the first-quarter corporate earnings season is set to begin this week and looks likely to bring a reality check to investors with disclosures over the extent of the economic damage wrought by the coronavirus restrictions.

“It would be unprecedented” if the S&P 500 failed to re-test or even fall below its low on March 23,” analysts at Bank of America Global Research said last week, according to Reuters. Meanwhile, Nomura’s analysts called the recent equity market bounce as “an unenthusiastic, inorganic bear market rally” in the same report.

Bitcoin has largely moved in tandem with the S&P 500 over the last six weeks or so. The cryptocurrency fell by 24 percent in March, as the S&P 500 declined by over 12 percent. Bitcoin is now reporting a month-to-date gain of 4 percent, while Wall Street’s benchmark index has added nearly 8 percent to its value so far this month.

The trend looks to be continuing, as bitcoin’s $300 slide seen during the Asian trading hours on Monday was accompanied by a 2 percent slide in futures tied to the S&P 500.

Bitcoin fell by over 5 percent on Friday, confirming a rising wedge breakdown on the daily chart. The bearish reversal pattern often ends up reversing the previous move, meaning the doors have been opened for a re-test of the March low of $3,867.

Macro trader Henrik Zeberg is calling a move as low as $1,000. While that target looks far-fetched, a move to levels below $6,000 due to the wedge breakdown could be seen.

Another analyst, Josh Rager, suggests the pullback from last week’s high above $7,300 to $6,600 could be the start of a bearish lower-highs and lower-lows set up.

The four-hour chart shows that bitcoin has already established a lower high at $7,200. It’s also confirmed a head-and-shoulders breakdown with a drop below the neckline support of $6,790. That’s created room for a slide to $6,100 (target as per the measured move method).

The bearish case would weaken if prices print a UTC close above the 50-day average at $7,145. That hurdle proved a tough nut to crack last week.

A bullish close above the 50-hour average, if confirmed, would likely pave the way for a test of the psychological resistance of $8,000. Some analysts expect the upcoming mining reward halving to keep the cryptocurrency better bid in the short term.

“For the short term, we expect to see bitcoin retest the US$8,000 price level in the coming weeks, with the upcoming halving event in May serving as a catalyst for the digital asset’s continued appreciation,” Matthew Dibb, co-founder, and COO of Stack told CoinDesk.