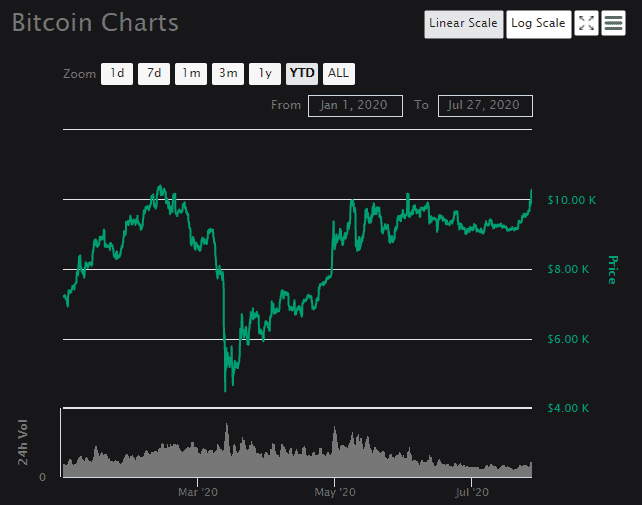 Bitcoin (BTC) price has finally made its move, growing above the $10k resistance level for the first time since mid-February. The latest price increase even allowed the coin to exceed $10,200, making it only around $160 short from reaching a new YTD high.

BTC is finally back above the $10k level for the second time this year. The first time it happened around February 9th, only days before a correction that preceeded the mid-March price crash.

Back then, BTC managed to surge up to approximately $10,360, before its price was rejected and forced back down. Following the March crash, the price grew back to the $10k mark in only two months. This recovery was rather impressive, considering that the coin dropped to $4k.

However, the $10k barrier was simply too strong, and the coin could never breach it. Instead, what followed was a nearly three-month-long period of relative stability, where the coin’s volatility dropped to some very low levels.

This was especially clear in the last month and a half. BTC was not without fluctuations, but for months, the price only moved up and down by around $200, which is incredibly calm for BTC.

Investors knew that the coin is going to make its move sooner or later, as it never remains that calm for that long. The only question was which way will the price go?

Many experts predicted a downward trend due to the coin’s correlation with the stock market, which was filled with sell signals. BTC even dropped below $9.500 last week, which many people took as a confirmation of such negative forecasts.

Some still believed that the coin will bounce back, which is why they decided to buy Bitcoin (BTC). Then, late on July 25th, the coin’s price simply started surging. It broke the resistance at $10,000, and it climbed to its peak at $10,265. This is where its price got rejected to $10,145, which happened earlier today.

Now, however, the price is heading up again — and this time, it might even hit a new yearly high.

Bitcoin price started seeing another surge about two days ago, and while it did encounter a strong barrier which rejected it, the coin is still not giving up.