Have you ever seen crypto markets drifting on a dead calm? Probably not. Digital currencies are notorious for sharp market fluctuations, and the current market environment, with a threat of the second wave of Covid-19, oil price war tensions and the worldwide economic downturn, is no different.

Shortly after the start of the virus outbreak at the beginning of 2020 the digital currency markets went into decline, losing more than half of their value by mid-March. According to CoinMarketCap, the total crypto markets value fell from $308bn in February to $118bn on March 12, 2020.

The top cryptocurrency by market capitalisation, Bitcoin dropped from more than $10,400 in February to $4,120 in March. Other top-traded cryptocurrencies – Ether and Ripple – experienced similar drops of more than 66 per cent.

Those days are gone! Having crossed the first half of the year, cryptocurrencies are gaining force again. It’s time to look at where we are now and how the top-traded cryptos have bounced back from the pandemic hit.

Best cryptocurrencies to invest in July

What are the best cryptocurrencies to invest in July 2020 and further towards the end of 2020? Watch our top three picks.

Cardano (ADA): at the helm of cryptocurrency recoveries

Although Cardano has never led the lists of top cryptos to invest in – yet – it drags so much traders’ attention recently that it deserves to be analysed first. As of June 7, 2020 the price of Cardano magically spiked up from the resistance level at $0.10 for the first time in 2020

The ADA momentum was bound to happen after the release of the Cardano Shelley mainnet. The latest upgrade brings a bunch of new features to the Cardano network that has been developed for more than five years.

The Shelley upgrade was closely watched by the crypto community and improved the ADA market sentiments and fundamentals. Cardano price rallied 60 per cent up and daily trading volume increased fourfold following the Shelley proof-of-stake announcement.

According to the latest Cardano price analysis, the crypto has been one of the best-performing altcoins. The ADA coin gained 85 per cent of its value in 10 days and is trading at $0.1300 at the moment of writing. The technical indicators also support the bullish momentum for ADA. The RSI reached the overbought region and the MACD continues moving higher in the positive territory.

Today we opt for Ethereum, as it has recently shown signs of the uptrend towards $250. The Ethereum chart broke a major resistance yesterday and entered a new potentially bullish trend, dragging all the altcoin segment upwards.

According to the latest Ethereum news and analytics from the Glassnode, the levels of activity on Ethereum have peaked to their highest levels in two years. At the beginning of July 2020 The number of active Ether addresses grew to 405,014 – the level not seen since May 2018. Active addresses represent the number of unique addresses active in successful transactions in the Ethereum network.

The augmented Ether activity could be triggered by several reasons:

The increased demand for Ether is seen as a major driver to fuel a major bullish rally. Today, Ether is the second-largest and most popular cryptocurrency. So far, however, it has been struggling to decouple from Bitcoin, with which it has been moving at a strong correlation of 89 per cent this year.

The recent upside movement of TRX cryptocurrency was largely triggered by Justin Sun’s, the Tron’s founder, announcement of a protocol upgrade, introducing privacy features to smart-contracts. The Great Voyage event was held on July 7, 2020 kicking the start of Tron 4.0 implementation.

The 2020 and 2021 roadmap for the Tron 4.0 implementation points to more reasons to be bullish on TRX until the second quarter of 2021. In case of favourable market conditions the cryptocurrency could retest its February highs of about $0.269.

Meanwhile, the price of Tron has built a solid support base above $0.0150. Currently trading 18 per cent up at $0.0178, TRX affirms the intention to rally further in the near term.

After breaking above the bearish trendline with resistance around $0.0168, the TRX/USD pair seems likely to continue climbing up to $0.0200. 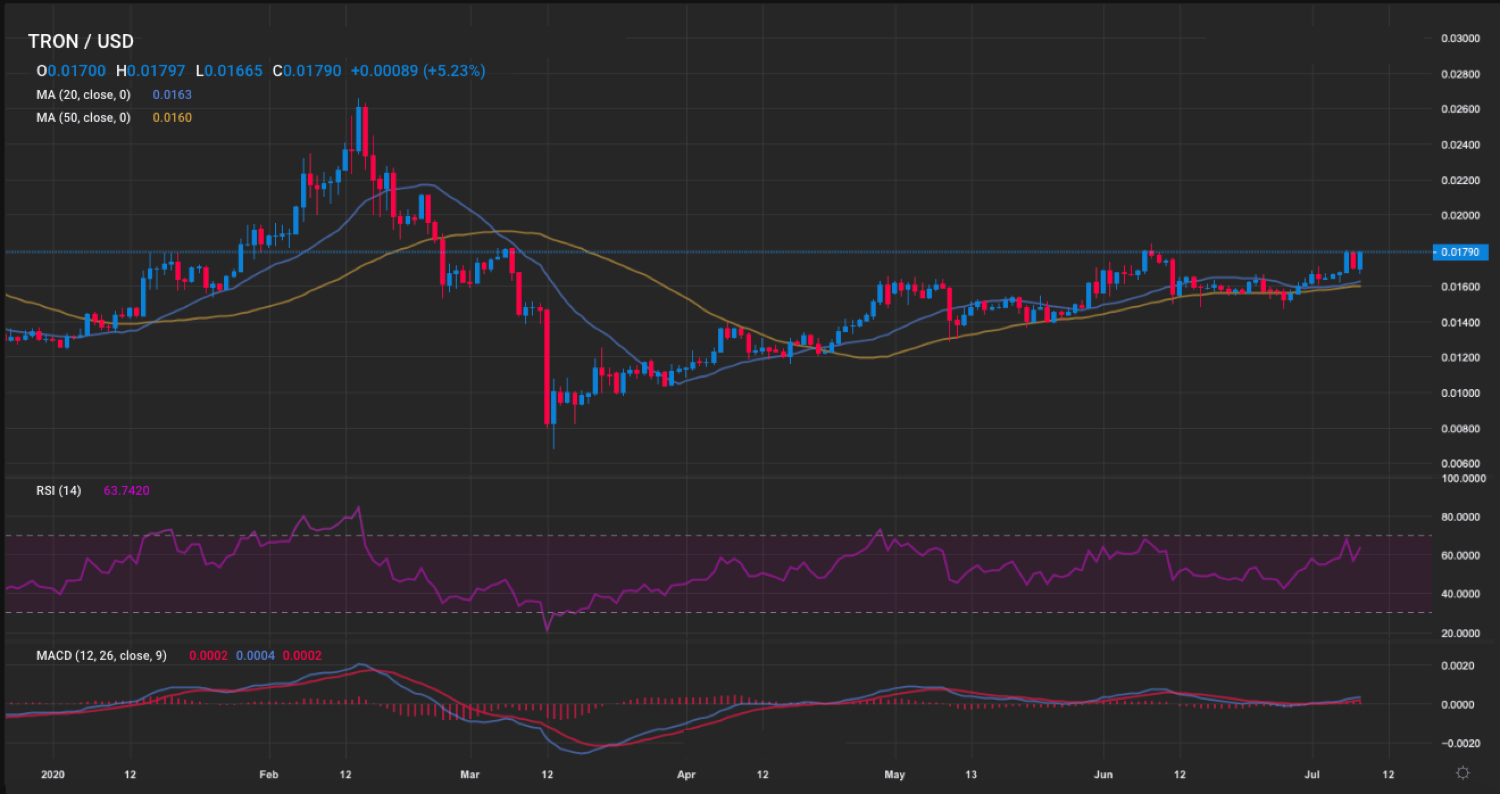 Bottom line: what crypto to invest in July?

Although the pandemic is not over and is still holding back the markets, investors are looking towards risky assets such as cryptocurrencies as some kind of alternative to traditional markets.

As a response to the challenges in the traditional economy, the transition to digital seems reasonable. Meanwhile, the cryptocurrencies have already started recovering from March lows, and analysts predict the gradual crypto market growth for the next couple of months or at least after the covid-19 fades away for ever.

Watch the best cryptocurrencies to invest in from our top three list for July and spot the best entry and exit points to trade them with profit at Capital.com.

Ready to get started?