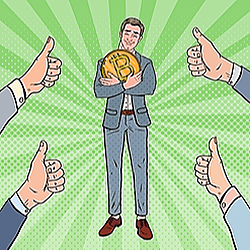 In this post, we are going to focus on promising cryptocurrencies that can be staked.

There are 3 ways you can profit from cryptocurrency investing:

Buying a cryptocurrency, usually at a low price and holding until you reach a price where you feel comfortable selling.

Staking is what we’ll be looking at in this post.

In this post we are going to focus on promising cryptocurrencies that can be staked. This way the benefits are two-fold:

Now let’s look at 5 promising cryptocurrencies that can be staked for staking rewards.

Ethereum (ETH) is currently sitting at a market cap of over $25 Billion and a price of $228. Considering the upgrades planned for the Ethereum blockchain, there is a lot of room for growth.

Ethereum allows developers to create decentralized applications with no central point of failure. It also enables the use of smart contracts that execute after the right conditions are met.

Ethereum has the first-mover advantage when it comes to programmable blockchains, it is also the most trusted and preferred blockchain development platform.

Ethereum 2.0 (also known as Serenity) is an upgrade that aims to bring beacon chains, sharding, and Proof-of-Stake (PoS) to the Ethereum blockchain.

These changes won’t just improve speed, transaction capacity, and efficiency, they will allow investors to stake their ETH holdings and earn a passive income.

Once Proof-of-Stake is active on the Ethereum Network, investors can expect to earn from 4% up to 10% per on their staked ETH. This way investors can earn passive income from staking and earn money from the value of ETH increasing.

Once PoS is implemented I expect a rush of investors racing to buy 32 ETH so they can stake and earn on their investment. Increased demand combined with increased scarcity due to staking will definitely have an effect on the price of ETH.

Ethereum is the 2nd most valuable cryptocurrency after Bitcoin and is a firmly established blockchain development platform. A price of $228 for 1 ETH is a far cry from its former highs of $350 and $1,000 and the next bull market should bring it close to its former glory.

Chainlink is a decentralized oracle network that connects real-world data to the blockchain smart contracts through “oracles”.

These oracles reside on the LINK network and connect off-chain data such as payments or events to smart contracts on the destination blockchain.

For example, Chainlink oracles can be used alongside a blockchain-based supply chain solution to issue a payout upon delivery of goods which have met quality control standards.

Chainlink has the first-mover advantage in this industry since they are the first to bridge real-world data and events to blockchains and this can have a massive impact in the next few years.

The LINK network is powered by its cryptocurrency “LINK”, which is used to reward contributors who participate in the LINK ecosystem.

There are data buyers and data providers, buyers request data and providers provide the data securely.

Buyers choose the data they need and providers place bids to be able to provide that data. To do so, providers must stake a certain amount of LINK tokens when they place a bid.

Once a provider is chosen, it’s their job to bring the correct data onto the blockchain.

As you can see, there is an internal economy within the LINK network, working to ensure that the correct data is provided to data purchasers.

The need to stake LINK tokens drives demand whilst also creating scarcity since staked tokens are locked up during the staking period.

How does Chainlink Staking work?

To understand Chainlink staking in more detail lets look at it like this:

You can earn staking rewards vis Chainlink in two ways:

Method 2 is easier and requires you to join a staking pool, however, keep in mind that the pool operator takes a cut of your staked earnings.

There are no exact numbers on how much you can earn from staking Chainlink (LINK) tokens since it depends on multiple factors including:

$23 per month per node according to the above hypothetical example. The requirements to run a node are low too needing only 1 core and 1 GB of RAM, so a laptop should be adequate in this case.

Chainlink (LINK) is still in it’s early stages and has already grown 10x from Jan 2019 ($0.39). I expect additional growth as the LINK ecosystem matures and adoption increases.

Tezos (XTZ) currently sits at a market cap of $1.9 Billion with a price of $2.60. Tezos was founded by Arthur Breitman, a former analyst at Morgan Stanley Investment Bank.

Tezos (XTZ) is a blockchain and decentralized app development network powered by a cryptocurrency called “tez” or a “tezzie”.

The Tezos blockchain is secured through a proof-of-stake mechanism, this is where token holders stake their tokens and receive a reward for doing so.

The main goal of Tezos is to create a “digital commonwealth” by getting XTZ holders to work together on making decisions that will improve the Tezos protocol.

Staking on Tezos is referred to as “Baking”, this is a process of signing and publishing blocks to the Tezos blockchain.

By validating all blockchain transactions, bakers are rewarded with tez (XTZ) for their work.

You can earn 6% annually by staking on the Tezos network and it takes around 21 days to start receiving staking rewards.

Once inside Trust Wallet, go to the Finance tab and you will see Tezos (XTZ), tap on it to go directly to the Tezos Wallet.

Next tap on More to access the Staking Menu. You will see multiple options here so click on Stake. Now tap on Validator to see the entire list of Tezos Bakers.

Chose a Validator then tap on Next. Now, review the transaction details and tap on Send when you are ready to start.

Once the staking process is complete, you can verify the results by tapping on More and then tap on Stake Details. That’s how you stake Tezos.

Tezos staking is already live and the tez (XTZ) token has stayed stable since it’s birth in 2018. Being only 2 years in I can see Tezos being worth a lot more in the long run.

NEO is a blockchain-based development platform that enables the digitization of real-world assets and deployment of smart contracts.

Formerly known as AntShares, NEO was founded by Da Hongfei and Erik Zhan in China in 2014 and was rebranded “NEO” in June 2017.

One of NEO’s main goals is to automate the management of digital assets through the use of smart contracts. These digital assets will form part of a decentralized smart economy system.

NEO’s Smart Economy System is comprised of the following technologies:

Assets can be easily digitized on the NEO blockchain, free of any third party involvement.

Users are able to record, buy, sell, exchange, or circulate various kinds of assets. Through NEO, physical assets are linked to their digital equivalent on the NEO Network.

Digital identities on NEO enables users to verify all individuals, organizations, and entities who take part in the Smart Economy.

Smart Contracts on NEO enable the execution of agreements and transactions once the agreed conditions have been met.

Since smart contracts are self-executable, there is no need for human interference or a centralized authority.

Smart contracts can also be traced since it’s activities are recorded publicly on the blockchain.

NEO is used to generate GAS, whilst GAS is used to pay for operations on the blockchain, for example, the deployment of smart contracts.

NEO is one of the easiest cryptocurrencies to stake. Just holding NEO in a supported wallet generates GAS, another cryptocurrency that supports the NEO network.

If you prefer a wallet that only supports NEO, GAS, and NEO-based tokens, Neon Wallet (Windows, Mac OS, Linux) is a good option from City of Zion, a group of developers that work on NEO-based projects.

All you have to do is move your NEO from an exchange to your NEON wallet and your NEO will start generating GAS automatically.

If you want a wallet that supports multiple cryptocurrencies then Exodus is for you. Just make sure you have GAS enabled in your settings.

With every new block is generated, 8 GAS will be distributed for every 100 Million NEO. This GAS is divided and sent out to NEO holders with each new block that is generated.

Currently, the block generation time is around 15 – 25 seconds, so this distribution roughly occurs 2-4 times per minute.

Since GAS is used to power the NEO blockchain, generating GAS is very important for NEO holders.

GAS is the equivalent of ETH or BTC for the NEO network since the NEO token is mainly used to represent ownership of the NEO blockchain, whilst GAS is the functionality token.

NEO has a lot of potential and is the first mover in the digital blockchain assets space.

NEO also has the potential to capture most of the Asian market (hence the nickname Chinese Ethereum). For these reasons, I have high expectations from NEO.

Ontology (ONT) currently sits at a market cap of $390 Million with a price of $0.60. Ontology is another Chinese based cryptocurrency and is currently partnered with NEO.

Ontology is a high-performance blockchain focused on data integrity (accuracy and consistency) and identity security.

Ontology enables users to share their identity with third-parties without the need to provide any identifying documents. Instead, they provide a cryptographic “signature” which represents the documents.

You can think of this as a digital version of a notary signature for a notarized document. Fraud and forgery is not possible due to the cryptographic nature of the Ontology protocol.

This is very useful for applications which require sensitive documents to verify identity, through Ontology they can quickly and securely verify the identity of new users.

To stake Ontology, you need to hold a minimum of 500 ONT ($300 at current prices). You can also stake your Ontology in multiples of 500 ONT.

To stake Ontology you simply need to hold ONT, any ONT generates ONG, as long as there is at least 500 ONT stored. The more ONT you hold the more you gain.

ONG is used to pay for transaction fees on the Ontology Network, essentially powering the ecosystem.

Staking takes place in rounds with each round lasting 120,000 blocks.

Since Ontology’s block time ranges from 1 second to 30 seconds, this means each round can range from 16 hours to 20 days.

After each round you can claim your staking rewards, you can also cancel staking at any time to retrieve all of your tokens. However, when you do this, the tokens will be locked until the end of the current round.

These cryptocurrencies may seem to be ahead of their time with the issues they aim to solve, especially to the average person who may not be aware of these problems.

However, this may be the very same reason why they hold a lot of potential.

If any of these cryptocurrencies interest you, here is where you can find and invest into them:

Times like this, when the market is quiet, is a good time for accumulation in my opinion, I cant wait to see how these projects mature over the years.

I hope you enjoyed this story, feel free to check out the useful resources below:

You can buy Bitcoin, Ethereum, Chainlink/LINK, Litecoin, Cardano, NEO, BAT, IOTA, OmiseGo, EOS, TRON/TRX, Cosmos/ATOM, Bitcoin Cash, Tezos, Monero, and many more from anywhere in Europe using BitPanda.
You can also keep up with me on Twitter.

Subscribe to get your daily round-up of top tech stories!